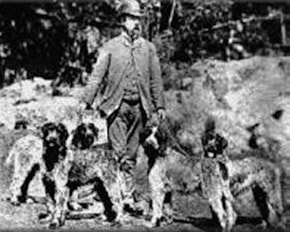 Although notations to Griffon history can be found which date back to 1545, development of the current day Wirehaired Pointing Griffon began in earnest in the Netherlands in 1873 by a young Dutch sportsman and avid hunter by the name of Eduard Karel Korthals (1851-1896). The son of a wealthy banker and cattle breeder in Schooten (near Haarlem, in The Netherlands), Korthals endeavored to create what he considered the ultimate walking hunter’s gun dog. The Wirehaired Pointing Griffon, or “Korthals’ Griffon” as it was then known, remains so named in many other parts of the world today. The Griff was developed as a hardy, all-terrain close-working hunting dog, working in the polders; the marshy low-lying ground of the Netherlands. Very little, if anything, has changed in the purebred Griffon since Dr. E.B. Ilyus, the first secretary of the G.C.A. wrote in 1917; “The chief characteristics in which the griffon excels, and is superior over setters and pointers, are his ready adaptability to all species of game, all climates, and all varieties of terrain, his exquisite nose, wonderful vitality and endurance, and the pronounced instinct which makes him the easiest of all dogs to train on game. As a retriever he has, in my opinion, no superior, and being very intelligent and affectionate, he makes an ideal man’s companion." 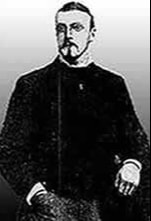 Korthals purchased his foundation bitch for this project, “Mouche,” in 1874. She was an adult brown and gray “Griffon*” with an excellent nose, and a reputation for being an exceptionally good hunter in a variety of terrains. Shortly thereafter, Korthals purchased Janus, Satan, Banco, Hector, and Junon. It is said that Janus’ coat was woolly, Junon’s was fairly short, and the others had a rough, wire coat. Mouche was bred to Janus, which produced Trouvee; a bitch with a better coat than all of her predecessors. Trouvee was then bred to Banco, which produced Moustache I, Lina, and Querida. These dogs are considered to be the primary progenitors of today’s Wirehaired Pointing Griffons, and are referred to as the “Korthals Patriarchs. In the book “Livre des Origines du Griffon a Poil Dur,” the ancestry of the true Griffons was traced to an ancient breed called the “Griffon Hound,” and referred to at least one cross with a “Pointer.” (Different sources speculate either Braque Français or German Shorthaired Pointer.) Other sources feel that contributors to the background of the Korthals Patriarchs included the Spaniel, Otterhound, French Barbet (a water retriever) and a Setter. In truth, there have been several breeds referred to as “Griffons” or having “Griffon type” for several hundred years. The definitive answer may be lost in history.
​

His profession as an advance agent for the French Duke of Penthièvre (assumed to be Pierre d’Orléans-Bragança, duc du Penthièvre (1845-19??), allowed Korthals ample opportunity to spread the word of this new breed on his many travels throughout Europe. He missed no opportunity to discuss and extol the virtues of this new breed that he described as being a deliberate and slow worker, with a keen nose and the versatility to both point and retrieve game. He attended every major field event, where he could discuss his concepts and breeding program with other members of the sporting fraternity of Europe. In 1877, Korthals was given the opportunity to utilize a large kennel facility owned by Prince Albrecht of Solms-Braunfels. So, with some financial support from his father, Korthals moved his kennel, Ipenwoud, to this facility in Biebesheim am Rhein, Germany. Over the next twenty years, Korthals dedicated his life to the development of the Wirehaired Pointing Griffon. Though a terrible disease swept through his kennel in 1882 destroying 16 young dogs, Korthals and his many friends throughout Europe, and especially in France, continued develop the breed until his death on July 4, 1896 at the young age of 44 due to laryngeal cancer.

The first Wirehaired Pointing Griffon to be registered with the American Kennel Club was a bitch by the name of “Zolette,” who appeared in the United States in 1887. She was registered as a “Russian Setter (Griffon)” with the AKC registration number of 6773. In that time, many breeds with an abundance of facial hair were thought to have originated in the Siberian region, hence the misnomer. Zolette was actually the daughter of a “Donna” grandson by the name of Guerre, bred to Tambour. Donna was acquired by Korthals in 1879 and was said to have the longer type of coat that Mssr. Boulet had produced.

On July 29, 1888, the first International Griffon Club was chartered in Mainz, by Messrs. Korthals, Winkler, and Voelsing. This was followed shortly thereafter by specialty clubs in individual countries; the Royal Belgium Griffon Club in 1895, France’s Club Français du Griffon d’Arrêt a Poil Dur Korthals in 1901, the Dutch Club De Nederlandse Griffon in 1911, then The Griffon Club of America in 1916. In this same year, the official breed standard for Wirehaired Pointing Griffons was established in the United States, and Westminster Kennel Club was privileged to have sixteen Wirehaired Pointing Griffons exhibited! An article written by Walter Dyer in the November 1917 issue of “New Country Life Magazine” entitled “The Wire-Haired Pointing Griffon” peaked interest in the breed. Unfortunately, this new enthusiasm was soon overshadowed by the onset of the World Wars. All serious breeding, as well as the club itself ceased to exist. Even so, by 1929, Griffons were registered in the American Field Dog Stud Book, and were a recognized presence in hunting and pointing events around the country.

In 1951, a new club named Wirehaired Pointing Griffon Club of America was formed by Lt. Col. Thomas Rogers and nine other GI’s returning from World War II, who had seen the dog’s work in Europe. In the mid-seventies the club formed a committee to guide breeders in producing better pups. The litters were advertised as “committee approved” and sold with an agreement to test the pups. The results of testing were disappointing, and the conclusion was drawn that there was a shortage of good dogs. This determination was made in spite of the fact that the approvals were focused on a very small fraction of North American Griffons. In the early eighties a decision was made to out-cross with the Czech Fousek, a similar looking, but different breed from Czechoslovakia, whose hunting style, appearance and temperament are more like that of a German Wirehaired Pointer. There was a second group, consisting of purists who adamantly refused to alter Korthals’ vision and purpose, who concluded that the offspring of the cross breeding would no longer be true Wirehaired Pointing Griffons. They were convinced that there was no shortage of good dogs that could excel as versatile hunters.

In 1991, the American Kennel Club recognized the official national parent club for Wirehaired Pointing Griffons to be the new club which was formed by the second group; the “American Wirehaired Pointing Griffon Association.” The old club (WPGCA) is not recognized by the United, Canadian, or American Kennel Clubs, FCI, NAVHDA, American Field, or the European Griffon and Fousek organizations. Additionally, these same organizations refuse registration and testing of the cross-bred Griffon/Fousek. It was a very difficult time, but many friendships remain today between people in both groups. Hopefully, at some point in the future, this new breed that the other group has created will be given a new name to reflect its new identity, and we can all return to supporting each others’ goals and efforts.

The Griffon is a very people oriented dog known for its trainability and high degree of cooperation. Although the Griffon has a great love for the field and is an excellent swimmer, it is equally at home in the obedience and show ring. With its keen nose it is also a natural at tracking. The fun loving side of its personality enjoys agility training. The Griff’s outgoing personality makes it a wonderful family pet and great with children. Overall, the Griffon is one of the best-kept secrets in the Sporting Group and is the ultimate VERSATILE hunting companion.
All images and content Copyright © 2021 the American Wirehaired Pointing Griffon Association, ALL rights reserved.
Copyright Policy /Acceptance & Use Policy