In the Conformation Ring

Many people see their first REAL Wirehaired Pointing Griffon while attending a local dog show, or seeing one on television. By exhibiting their potential breeding stock at a dog show, breeders are given a licensed AKC judge’s opinion on how well each dog conforms to its breed standard in comparison to the other dogs being exhibited (thus the term “conformation”). Purebred dogs who have full registration with AKC, and who are not spayed or neutered, nor who have any disqualifying faults can be shown in the conformation ring (also referred to as the “breed ring”) at a dog show. Spayed and neutered dogs can be exhibited only in a few NON regular (non pointed) classes in the breed ring. They CAN compete in all obedience, agility, junior showmanship, tracking, and hunting/field events. Many people who simply enjoy showing their dogs in the breed ring are also welcome.
In the breed ring, dogs compete for points towards earning the prefix title of Champion. Most shows used to be conducted as “benched” shows, whereby after the dogs were finished competing, they are required to remain on display with others of their same breed, in a benching area. Some folks still refer to conformation Champions as “Bench Champions.”

​Visit AKC’s website for more information on titles, their abbreviations, and descriptions.
In breed competition, each breed is judged by itself, with the dogs (males) being judged separately from the bitches (females). Each sex is divided into six regular classes; for instance;

Novice: For dogs six months of age and over, which have not, prior to the date of closing of entries, won three first prizes in the Novice Class, a first prize in Bred-by-Exhibitor, American-bred, or Open Classes, nor one or more points toward their championship

Amateur-Owner-Handler – For dogs that are at least six months of age that are not champions. Dogs must be handled in the class by the registered owner of the dog and is limited to exhibitors who have not, at any point in time, been a professional dog handler, AKC approved conformation judge, or employed as an assistant to a professional handler.

Bred by Exhibitor Dogs: For dogs that are exhibited by their owner and breeder, that are not yet champions.

Open: For any dog of the breed, at least 6 months of age. 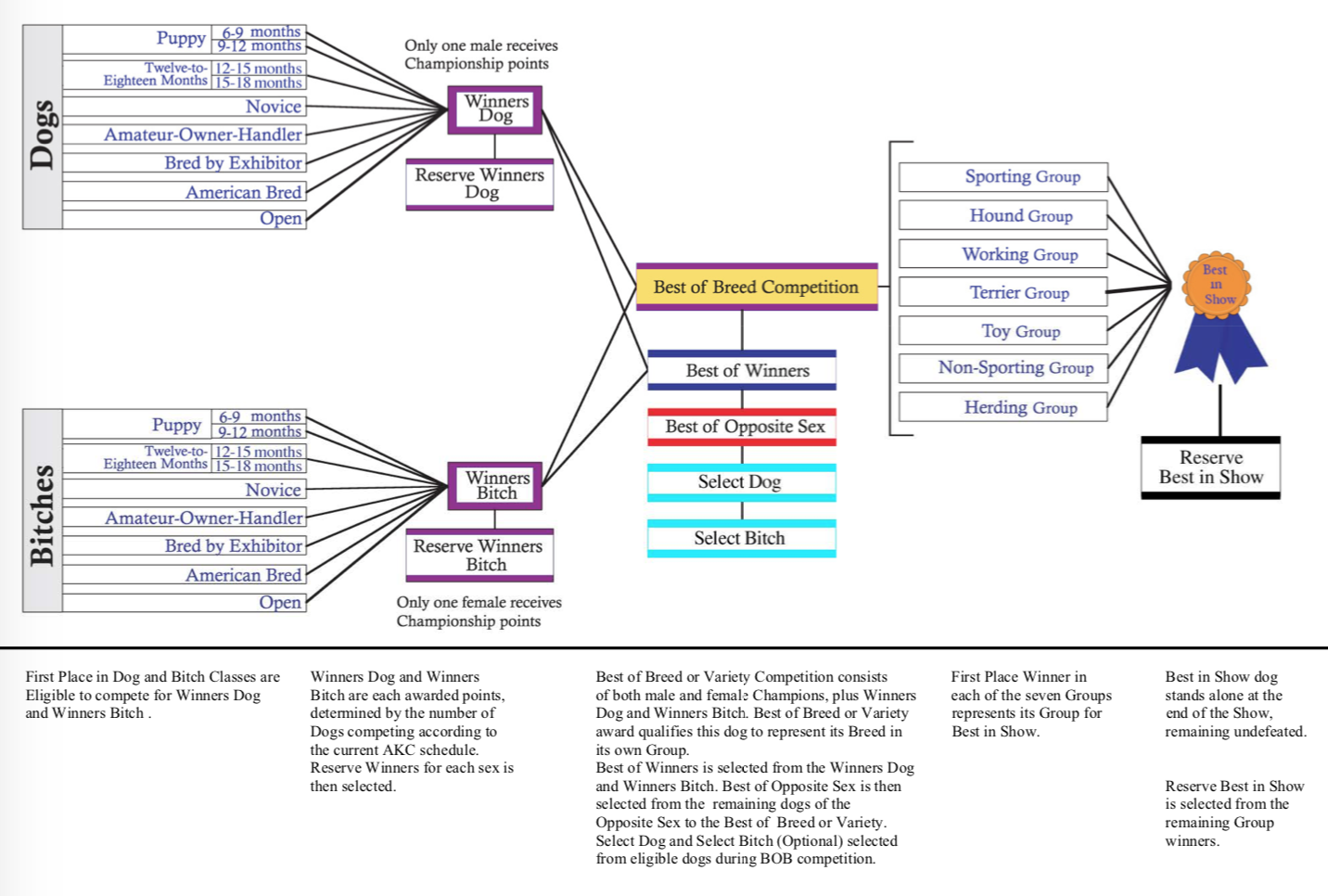 Click on the image above for more information from AKC

Each of these classes are judged individually, and in the order presented above. Dogs in each class are judged and placed in the relative order that – in the judge’s opinion – each dog most closely resembles the breed standard. Structure, movement, temperament, and type are all considered in accordance with each breed’s standard. Dogs (males) are judged first, followed by bitches (females). After judging in one sex is complete, the first place winners from each sex’s class are called back in to compete in the “Winners” class. One of the 1st place dogs will be awarded “Winners Dog” and receive the appropriate number of points towards his championship that day. The dog that took 2nd place in the class that the Winners Dog came from comes back in and competes with the remaining males for “Reserve Winners Dog.” This dog will only receive points *IF* it is found that the dog who was awarded Winners Dog is somehow ineligible. This most commonly occurs when a dog is entered in an inappropriate class — usually Bred-By or American Bred – which some people have a hard time understanding the rules for who can enter and who can handle the exhibit.
After the males have finished their Winners class, the bitches are judged in exactly the same class structure – this time for females only. The first place winners again return to compete for Winners Bitch and Reserve Winners Bitch.
ONLY THE WINNERS DOG AND THE WINNERS BITCH RECEIVE POINTS TOWARD THEIR CHAMPIONSHIP. Class placements do not count towards championship points.
After all of the class dogs in a given breed have been judged, and the Winners Dog and Winners Bitch awarded, its time for Best of Breed Competition for that breed! This class is open to all Champions, as well as the Winners Dog and Winners Bitch. Again, each dog is judged against the standard and the one dog which the judge feels most closely fits the standard is awarded Best of Breed! That dog goes on to represent the breed in the Group competition later that day. The judge will also select between the Winners Dog and Winners Bitch for “Best of Winners.” This is great if one sex’s entries are greater than another – as the BOW is also allowed to earn the higher number. Last, the judge will select the Best of Opposite Sex to Best of Breed, or “Best Op.” This is awarded to the dog or bitch of the OTHER sex than is the Best of Breed winner. For instance, if your BOB winner was a bitch, the judge would select a dog as BOS.
In the afternoon, after the individual breed judging is complete, each BOB winner will compete against other BOB winners of breeds in their same group. Breeds are generally grouped by functional purpose. In AKC competition, there are seven groups;

Terrier: Bred for vermin control. “Terrier” derived from the French for “one who goes to ground.”

Non-Sporting: A kind of “miscellaneous” group of dogs, many whose original purpose no longer exists, or they’re no longer used for that purpose.

A judge selects a first through fourth placement in each group, with the first place winner going on to represent his/her group in the Best In Show competition at the end of the day.
After all groups are judged, each of the first place Group winners compete for Best In Show. At the end of this day of gradual process of elimination, ONE dog will walk away with the coveted Red, White, and Blue rosette – and the pride and joy of accomplishment that goes with it!
Novices are encouraged to learn as much as they can about showing dogs, take handling classes from their local all-breed club, study their breed standard carefully, and to participate in the wonderful sport of dogs in whatever venue they enjoy, including showing in the breed ring!

In the American Kennel Club, to earn the prefix title of Champion (Ch.), a dog must earn a total of 15 points. At least 6 of these points must come from shows with “major” entries (3, 4, or 5 point shows), and must be awarded by two different judges. The remaining points must be awarded by at least one additional different judge (a third). The number of dogs required to earn points varies from region to region, and from breed to breed. Point schedules are re-evaluated every year and change depending on the number of entries of a given breed in that region during the previous year. For more information about points, visit AKC’s page on point calculation. Point schedules change every May, so it’s a good idea to check your region’s point schedule here.


​If you are interested in finding out more about Showing in the Conformation Ring,
AKC has a Beginner's Guide to Dog Shows available here.

Exhibitor Resources to various Superintendents about Upcoming Shows, Online Entry information, results from previous events and other info can be found by visiting
the list of Licensed Superintendents for AKC.
All images and content Copyright © 2022 the American Wirehaired Pointing Griffon Association, ALL rights reserved.
Copyright Policy /Acceptance & Use Policy